Riding on the Tail of the Devil 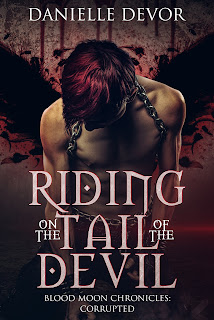 Release: Will be re-released


Centuries ago, the legendary vampire king, Mathias died after being tortured by Lilith, the Queen of Lilitu. His death sent shock waves through the vampire world, causing civil unrest and unifying the vampire world. However, rumors soon spread that Mathias was not gone for good—he would live again. With hope in their hearts, the king’s fans awaited his second coming.

And they waited… until a street kid with the same name as the legendary figure is gunned down in a drive-by shooting. This child makes a simple wish—to be a vampire.

The wish is granted, but not without consequences. Once the news spreads that a boy who bears the name of their once beloved king has come into their midst, the vampire world is overjoyed, believing that their lost king has finally returned.

Has he? Mathias has no idea. But after an encounter with Lilith, the current ruler of the vampire world, he begins to have terrifying visions. True death becomes a very real threat. It’s time he figured out how to save himself while keeping the rest from coming for his throat.