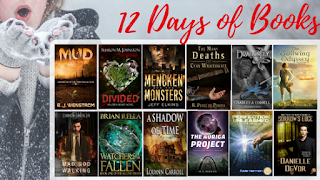 Happy holidays everyone!
To celebrate, 12 authors have banded together to give you a truly amazing collection of speculative fiction novels. Over the next 12 days leading up to Christmas Eve, we'll all be offering you ways to enter to win them!
An official unveiling of the complete 12-book giveaway collection will be coming soon (one of them is my own novel, Sorrow's Edge: Book Two of the Marker Chronicles).
But for now, go ahead and enter to win! You can start by joining my email list. http://eepurl.com/btA5gf
Then, check out the other participating authors for even more ways to enter! Here is the full list of authors:
Charles Cornell
Danielle DeVor
Louann Carroll
Connor Drexler
Jeff Elkins
M. G. Herron
Sharon Johnston
Jade Kerrion
R. Perez de Pereda
Brian Rella
Antonio Simon, Jr.
E. J. Wenstrom

Constructing Marcus is going to be re-released by Ellysian Press. Not sure of the release date yet.

Maw is set for a 2017 release with Ellysian Press.

Sorrow's Turn will be released in 2017 (Currently estimated for Spring) by City Owl Press.

And, Dancing with a Dead Horse has been re-titled as Horses and I will be pursuing a new publisher.

I will likely have news of some signings for the coming year, and I will post them here and on the newsletter when I know more. :)