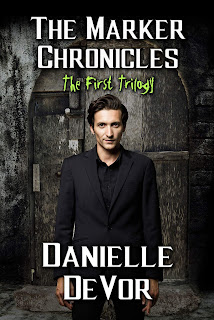 From Examiner’s Recommended Women in Horror comes THE MARKER CHRONICLES by Danielle DeVor. The First Trilogy contains books 1 – 3. Now, for a limited time, save BIG by buying this special bundle deal at a killer price!
**********
SORROW’S POINT (Book 1)
Not All Exorcists are Equal....One is Marked
When defrocked ex-priest, Jimmy Holiday, agrees to help an old friend with his sick daughter, he doesn’t expect the horrors that await him. Blackmoor, his friend’s new residence, rests upon the outskirts of the town of Sorrow’s Point. The mansion’s history of magic, mayhem, and death makes it almost a living thing – a haunted mansion straight out of a Stephen King novel. Jimmy must decide if the young girl, Lucy, is only ill, or if the haunting of the house and her apparent possession are real.
After the house appears to affect him as well with colors of magic dancing before his eyes, rooms warded by a witch, and a ring of power in his voice, Jimmy is met by a transient who tells him he has “the Mark.” Whatever being “marked” means, Jimmy doesn’t care. All he wants to do is help Lucy. But, helping Lucy means performing an exorcism.
**********
SORROW’S EDGE (Book 2)
Uncovering The Truth…Will Take An Exorcist
Jimmy Holiday, defrocked priest turned exorcist, is trying to get his life in order. With his on-again off-again witchy girlfriend moving in, the spirit of the little girl from his last exorcism hanging around, and a secret organization of exorcists hounding him, Jimmy equals stressed.
When a stranger calls in the middle of the night asking for help with a possession, Jimmy is about to land in a mess of trouble. Especially since the man on the phone claims to have gotten his number from Jimmy’s old mentor. Too bad his mentor has been dead for years.
After a mysterious silver flask arrives at his doorstep, Jimmy is left with two options: either ignore the newest enigma the universe has tossed him, or listen to Lucy and travel to Arizona to solve the mystery before all hell breaks loose…again.
**********
SORROW’S TURN (Book 3)
Some things are worse than demons.
Jimmy Holiday, reluctant exorcist, is finally getting the help he needs from the higher-ups. The Order of Markers is sending him to the Vatican’s exorcism school. Now, he’ll receive the training he should have gotten at the beginning. One problem, someone wants to sabotage him.
When his time at the school is cut short, Jimmy receives an interesting new case. It is the assignment that no one wants—a corpse has come back to life. And it isn’t a zombie.
Too bad nothing goes as expected. Armed with his usual bag of tricks, Jimmy thinks everything will eventually be all right. Well, that is until his betrayer turns out to be the person he trusts most.